One of the most fascinating things about looking through a telescope is how much one does not see. I am usually one of the first to arrive at a star party, setting up just as the sun is going down, then waiting with varying degrees of patience for the evening light to fade and the sky to get dark enough for some serious observing. But I always find things to keep me occupied during this time. Among my favorite ways to make use of this enforced break in the action is to point my telescope at a random spot in the sky and watch patiently as the stars gradually appear. Look away for a minute, and the three stars you were just looking at have become five, or even six. Wait a few minutes more, and they’re starting to be sprinkled all over the field of view. But come away from the eyepiece and look upward naked eye… and still nothing – the evening twilight is still too bright to allow anything to show. You begin to appreciate the light gathering power of your instrument.

But still more impressive is the vast difference between what the observer can see through the eyepiece even on the darkest of nights, and what shows up on an image taken of that same area. 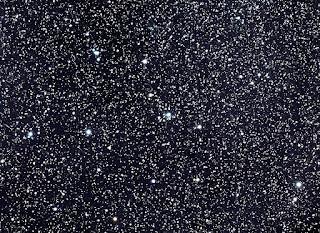 Here we see a photograph taken of a portion of the constellation Canis Major. Myriads of stars crowd in on the viewer from every side. What is remarkable to me about this image is that I know very well that with my best eyepiece in my largest telescope under ideal conditions, I would see nothing at all like this. Yes, I would see more stars than I could easily count, but they would not be saturating the field of view as in this image. There would still be fields of pure black visible between each individual point of light.  It is the magic of prolonged exposure that enables the camera to gather the photons from otherwise invisible stars and display them to our admiring view.

And this image was taken with amateur equipment under light polluted suburban Maryland skies! Far more impressive results are achieved with giant telescopes situated in southwestern deserts, far from city lights. Not to mention what can be seen through orbiting platforms, such as the Hubble Space Telescope.

When we come to even more esoteric means of photographing the sky, such as recording emissions from the non-visible wavelengths with, for instance, the Herschel Space Observatory, then we might see a field of view devoid of “black” altogether.

Take a good look at this image. 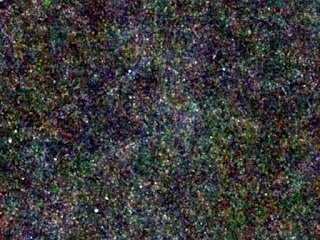 Nearly every point of light you see in it is not a star – it is an entire galaxy, each composed of hundreds of billions of stars. There are more stars visible in that little rectangle than there are grains of sand on the beach at Ocean City, Maryland! And yet the field of view is far smaller than that of the previous image, and that was no larger than what I can take in with a good pair of binoculars, through which I might be seeing a handful of stars surrounded by an ocean of black.

This got me to thinking about all that black I see when observing. Intellectually, I know it’s crammed full of light – I just can’t see it. One of my favorite science fiction novels is Out of the Silent Planet by C.S. Lewis, first published in 1938. I must have read it more than a dozen times already, and I’m sure I’ll be re-reading it again someday. The hero of the story, Professor Elwin Ransom, has been kidnapped by two fellow scientists (for quite evil purposes) and has found himself aboard a spaceship bound for an unknown world. Ransom at first experiences a great terror at the idea of being in “outer space”, that terrible emptiness between the planets where supposedly nothing exists. But he gradually realizes that all his fears were unfounded. They had arisen from a completely false notion of what “space” was actually like. 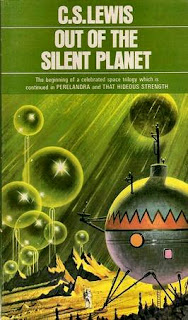 But Ransom, as time wore on, became aware of another and more spiritual cause for his progressive lightening and exultation of heart. A nightmare, long engendered in the modern mind by the mythology that follows in the wake of science, was falling off him. He had read of “Space”: at the back of his thinking for years had lurked the dismal fancy of the black, cold vacuity, the utter deadness, which was supposed to separate the worlds. He had not known how much it affected him till now – now that the very name “Space” seemed a blasphemous libel for this empyrean ocean of radiance in which they swam. He could not call it “dead”; he felt life pouring into him from it every moment. How indeed should it be otherwise, since out of this ocean the worlds and all their life had come? He had thought it barren: he now saw that it was the womb of worlds, whose blazing and innumerable offspring looked down nightly even upon the Earth with so many eyes – and here, with how many more! No: space was the wrong name. Older thinkers had been wiser when they named it simply the heavens – the heavens which declared the glory.
(Out of the Silent Planet, Chapter 5)

You need to ponder that for a minute; there are huge implications here. For no matter where or in what circumstances you might find yourself, no matter how empty and lonely your surroundings might appear, with sufficiently powerful instruments you could pick up some verifiable trace of every last star and galaxy in the universe. All of them. They might be inconceivably faint, but they’re there. This means that every single point in the universe is filled with light from every other point. The Sum Total of Everything is present everywhere. You are never alone – in fact, you are forever and eternally accompanied by everything that is.

“If I take the wings of the morning and dwell in the uttermost parts of the sea, even there Thy hand shall lead me, and Thy right hand shall hold me.” (Psalm 139: 9-10)

As I’ve already mentioned, we’re starting out with what might be the worst possible star on our list to observe through the eyepiece or to locate by star hopping. This is not only due to the intrinsic dimness of our target star, but also to its being situated in a particularly nondescript region of the sky. There are no bright, splashy landmarks (?skymarks?) by which to steer. The nearest naked eye stars (the widely separated optical binary Phi Cancri 1 and 2), at magnitudes 5.58 and 5.55 respectively, scarcely deserve the label (at least when observed from Howard County, Maryland). The closest really bright star is Pollux way over in neighboring Gemini. 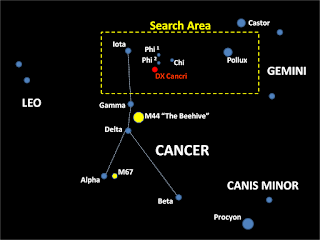 I personally always like to get my bearings in the sky prior to zeroing in on a specific object. In this case, a good idea is to take in the Big Picture: Gemini off to one side, and Leo to the other. Sandwiched between these two gorgeous constellations is what has got to be the dullest of the signs of the zodiac (at least to the naked eye), Cancer. Its brightest star, Beta Cancri, which shines at a measly 3.53 magnitude, is about as far away from DX Cancri as one can get and still be within the constellation’s boundaries. Closer to our target, Delta Cancri (Asellus Australis) is a 3.94 magnitude star nestled up against the spectacular Beehive cluster (M44). (Off topic, but fun to know: Delta Cancri also goes by the utterly ridiculous name of Arkushanangarushashutu, a Babylonian word meaning “Southeast Star of the Crab”.) Iota Cancri is the closest relatively bright star to where we want to end up. It boasts a magnitude of 4.02, with a fainter 6.57 magnitude companion. (By the way, take the time to check out Iota Cancri before going on from there. It is a breathtakingly beautiful, easily splittable double star often referred to as the “Albireo of Spring”, having a bright yellow primary accompanied by a deep blue companion.)  DX Cancri lies within a right triangle formed by Pollux, Delta Cancri, and Iota Cancri.

So far, we could have gotten to this point by naked eye alone on a reasonably dark night. Using my 8X56 Celestron binoculars, I can easily see Phi Cancri 1 and 2, our next signpost. They are found  just below a line from Iota Cancri and Pollux,  a little more than a third of the distance between them from Iota Cancri.  Centering our view on these two stars, we see a 6th magnitude star about a full moon’s distance to the southwest of Phi Cancri 2, which serves to guide us to the next level. If we make an imaginary right triangle extending to the north and west, with the line between Phi Cancri 2 and this star being the hypotenuse, our target now lies just south of where the two legs would meet.  Switching to telescope view (and remembering that, if you are using a diagonal, from here on in everything is mirror-imaged), with my 5-inch refractor I can just make out three closely-spaced 12th magnitude stars to the immediate left of where DX Cancri should be. They form an approximately north-south line, with the more northerly pair being separated from each other by about half again as much as the other two. Our star lies right where the third point of an equilateral triangle would be, with this line of stars being the triangle’s base. 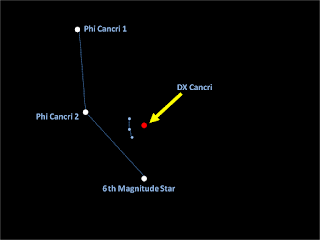 But here, alas, is where I must admit defeat. With my largest telescope, using my best eyepiece at highest magnification, on a clear, steady, moonless night and with infinite patience, at the point in question, I see… nothing. DX Cancri is simply too faint for my largest telescope.

But trust me. We began with the worst. After this one, all else seems easy!

(I saw DX Cancri with my own eyes only one time, ever. On May 11th, 2012, Govind Rao and I searched for it using his 16-inch Schmidt-Cassegrain. We managed to finally see it after about a half-hour’s difficult search. Even through his huge light bucket, it still required averted vision to observe this star through the suburban light pollution of Howard County’s Alpha Ridge Park. And even then, it took some while before we were satisfied we were actually looking at the correct star! After seeing how unbelievably faint this object was in even such a large instrument, I realized that my earlier search for it with a 5-inch telescope had been doomed from the very start.)