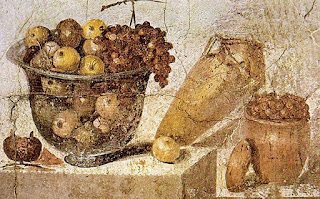 “Alcinous, poised in all his majesty, took the hand of the seasoned, worldly-wise Odysseus, raised him up from the hearth and sat him down in a burnished chair … A maid brought out water soon in a graceful golden pitcher … A staid housemaid brought bread to serve him, appetizers aplenty too, lavish with her bounty … the long-suffering Odysseus ate and drank.”
(The Odyssey, Book 7, Lines 93-200-210) 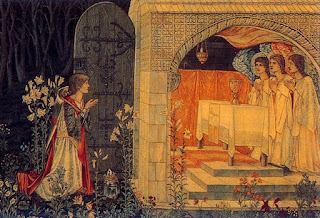 “Than entird into the halle the Holy Grayle covered with whyght samite, but there was none that might se hit nother whom that bare hit. And there was all the halle fulfilled with good odoures, and every knight had such metis and drynkes as he beste loved in thys worlde.”
(Sir Thomas Malory, The Tale of the Sankgreal) 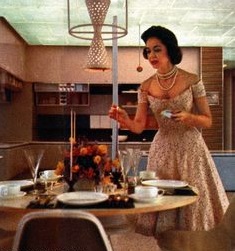 Monsanto House in Disneyland, circa 1960

“As [Orlon] spoke a tray laden with appetizing dishes appeared in the air in front of each person ... ‘The food before you … is balanced as to carbohydrates, proteins, fats, and sugars, and contains the due proportion of each of the various accessory nutritional factors. You will also find that the flavors are agreeable to each of you.’”
(Skylark Three, Chapter 9, Page 149)

Tales of wondrous vessels of plenty, cornucopias, and various other sources of inexhaustible wealth are probably as old as Man himself. One of the earliest known variants is the story of the infant Zeus, who accidentally broke off one of the horns of the goat who was nursing him (he was being hid from his father Kronus, who devoured all his children lest one should supplant him). The horn thereafter never ran dry of milk, which poured out of it endlessly. In the Old Testament, we read of the Prophet Elijah’s jar of meal and pitcher of oil, which “was not spent, nor did it fail” for three long years of drought. Celtic myths of magical cauldrons, Germanic legends of enchanted cups and saucers, Arabian stories of Aladdin and his Lamp, not to mention the vast literature concerning the Holy Grail, all speak of a deep desire for some way out of the ever present tyranny of hunger. As Odysseus says to Alcinous, “The belly’s a shameless dog, there’s nothing worse. Always insisting, pressing, it never lets us forget.” 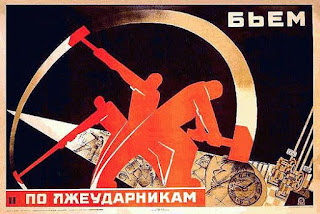 The almost laughably clunky way (see quotation above) in which Smith handles the welcoming banquet for our travelers on Norlamin, with its own take on the venerable Horn of Plenty, is nevertheless perfectly in tune with the uber-“scientific” Norlaminian society we are about to be shown. Keep in mind that Skylark Three was written in the middle of the Soviet Union’s first Five Year Plan, a supposed objectively rational realignment of government, industry, and society itself along allegedly scientific principles. As the world watched in mixed fascination, bemusement, and occasional horror, the largest nation on the planet tore its own self up by the roots and set about refashioning every aspect of human existence into a purposefully designed and relentlessly regimented New Society, the creation of Homo Sovieticus. Gone were age-old traditions, thrown onto the “ash heap of history” were notions of nationhood, family ties, and religion. In their place, humanity would be resurrected free from the illogicalities and inefficiencies of the past, prepared to leap into a bright, clean, shiny future in which all the arrows of progress were up, all the ledgers in the black, and every person productive and happy. 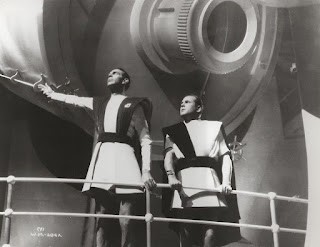 "The universe... or nothing! Which will it be?"


And such ideas were not unique to Soviet Russia. In the West, H.G. Wells was vigorously propounding an eerily similar plan of action. Just watch his cinematic magnum opus, Things to Come (seriously, watch it - it’s well worth the time spent) - a fanciful tale of the entire world basically blowing itself up, only to be rebuilt by a benevolent class of technocrats, styling themselves Wings over the World. As silly as the entire concept looks to us today, it was taken with (literally) deadly seriousness in the 1930s. 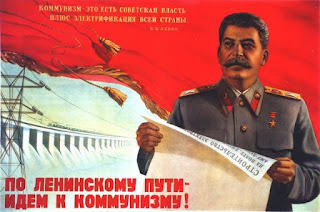 "Communism is Soviet Power plus electrification of the entire country!"

And E.E. Smith was no exception. In the three climactic chapters of Skylark Three (indeed, of the whole trilogy), he described in some detail what was standard thought for his time, as to what the ideal society of the future ought to look like. The entire populace of Norlamin is not only well educated, but the further pursuit of knowledge is the principle, if not the only, preoccupation of everyone. The planet is essentially one giant research institute. And as more and more is learned, specialization in study becomes more and more (ridiculously) extreme.

“One of [my sons] will assume my duties when I pass; the other will take over a part of some branch of science that has grown too complex for one man to handle as a specialist should. In fact, he has already chosen his specialty and been accepted for it – he is to be the nine hundred sixty seventh of Chemistry, the student of the asymmetric carbon atom, which will thus be a specialty from this time thenceforth.”
(Skylark Three, Chapter 9. Page 147)

As to the purpose of all this learning, Smith is as silent as he was concerning what the Dasorians were doing with their own utopian existence. In fact, the ultimate futility of all their endeavors was starkly laid out by Orlon, even as he greeted the travelers upon their approach to Norlamin. "And whether we delve baffled into the unknown smallness of the small, or whether we peer, blind and helpless, into the unknown largeness of the large, it is the same – infinity is comprehensible only to the Infinite One: the all-shaping Force directing and controlling the Universe and the unknowable Sphere. The more we know, the vaster the virgin fields of investigation open to us, and the more infinitesimal becomes our knowledge."

But no matter, the life of every Norlaminian is strictly regimented from cradle to grave – 25 years of childhood spent at home with the family, 25 of adolescence spent in the Country of Youth, where “they develop their brains and initiative … Each also finds his life’s companion.” This is followed by 100 years of adulthood and independent research. At the end of that time, the man and wife (apparently, bachelors are unheard of on Norlamin) together retire to the Country of Age “where they rest and relax … [free to] do whatever they care to do, for as long as they please to do it.” Finally, they “pass”, voluntarily euthanizing themselves to make way for the next generation.

And as each individual’s life is rigorously structured, so is the Norlaminian daily routine. Prescribed periods of set length punctuate the day – times for meals, work, exercise and relaxation, and sleep, all rigidly adhered to and announced worldwide by a bell. (Smith here having apparently forgotten about time zones.) If one happens to find himself in the middle of something when the bell sounds, it is immediately dropped until the next period appropriate for such activity. (I am reminded here of Dante’s Purgatorio, where all upward movement ceases the instant the sun sets, and does not recommence until sunrise.) So of course it would be dramatically impossible for such a situation to not occur at the most exciting point in our heroes’ time on Norlamin, which Smith uses to maximum effect in his most brilliant piece of writing ever. But that will have to wait for now… (see what I’ve done here?) 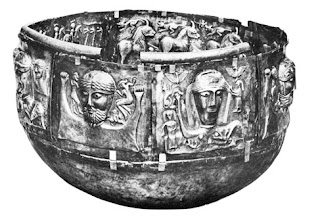 In the meantime - no, I haven’t forgotten about those Cauldrons of Plenty with which we began this section. On their way to watery Dasor, Seaton makes the remarkable observation, “Every folk legend has some basis, however tenuous, in fact.” (page 83)
So what do we make of all these magical cups, bowls, horns, lamps, and stewpots which seem to haunt our species? Well, it turns out that E.E. Smith said it first (or, at least, his character Seaton did), but ten years later British philologist and Cambridge University professor C.S. Lewis rocked the theological world by his unexpected conversion to Christianity, saying that all the myths and legends of all times and cultures were true… in the Gospels – that every dying and rising God, that every marital infidelity of Zeus, that every avatar of the Hindu Godhead, was an echo, sometimes strong, and at other times faint and dim, of the Incarnation. Lewis’s friend and fellow Inkling, Charles Williams, went even further. He explicitly stated in his Arthurian Torso that these magical vessels were pale reflections of the Holy Eucharist itself. Such a state of affairs was hinted at by no less an authority than Saint Paul, who during his speech in Athens told those listening that the very temples and prophets of the Pagan world were seconding his words. (“Whom ye ignorantly worship, Him I proclaim!”) 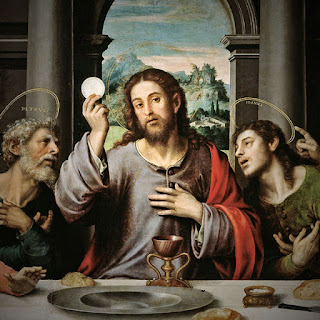 So as I wrote way back on the 8th of August in the first entry in this slog through the Skylark trilogy, there’s a reason why the poetry of Homer is so powerful, why it speaks to us so ugently. It’s because it’s true! No, the wanderings of Odysseus are not historical events. Of course they’re not. But they do speak to actual facts – and you don’t have to look far to find them.