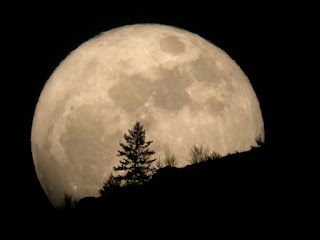 Last night was the latest so-called “Supermoon”. Yes, I know you’re not supposed to be able to discern any difference in angular size from a “normal” Full Moon, but I’d swear the naked eye can detect a difference in apparent magnitude. The dang thing was like an automobile headlight up there! Anyway, it got me to thinking about something I had written more than 4 years ago. I thought those words would be a great place from which to start the next series of postings, which are going to (largely) be about observing the Moon. Here they are (from April 7th, 2012):

Went out last night to take a look at the moon. Yes, the full moon - big as a dinner plate, almost too bright to look at even with your naked eye, washing out the stars and casting shadows on the brightly-lit ground. That moon.

Is there anything to see in a full moon? Most people assume not, and keep their scopes locked up until the damn thing goes away. Well, I felt like challenging that conventional wisdom, and took a good, hard look. Here is what I saw: 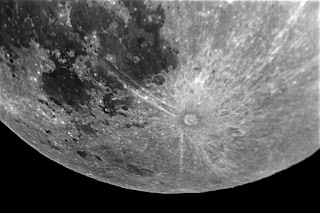 1. Rays. Lot's of 'em! Mainly from Tycho, Copernicus, and Kepler, but also from at least a dozen less notable craters. We so often admire images of the great lunar crater rays, but all too seldom actually look at them with our own two eyes. They can only be seen at or near the full moon, and are well worth the effort it takes to observe them. Beautiful! 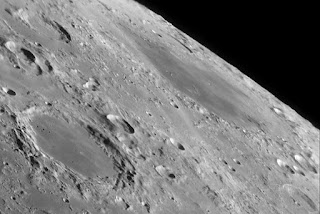 2. Thanks to a favorable libration, I had a terrific view of part of the lunar farside, the Mare Humboldtianum. This "sea" is best seen when all the shadows are gone, and the dark mare material really stands out against the highlands background. 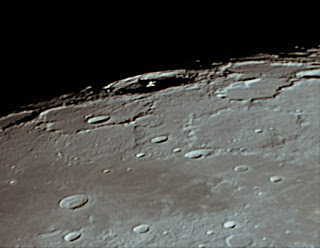 3. Great view of the lunar North Pole. Many people do not realize that there is actually no such thing as a true "full moon" - ever. The only time the moon is directly opposite the sun is during a total lunar eclipse. Most of the time, our satellite passes either above or below the Earth's shadow, so even at so-called full moon there is still a terminator. It will be at either the North or the South Pole. Last night it was in the north. Terrific view of the edge-on craters Pythagoras and Anaximenes - two locations that deserve more attention from amateur astronomers. 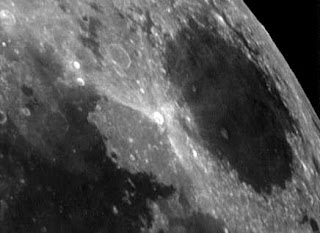 4. Proclus. This result of an oblique impact is best observed at full moon, when its definitely odd ray pattern really stands out. You can easily visualize the approaching asteroid coming in at a very shallow angle from the west, and splattering debris in a most unique pattern. 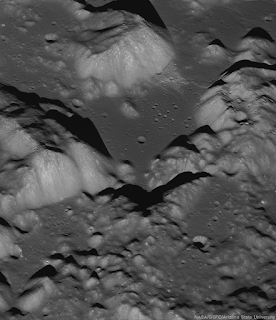 5. The Taurus-Littrow area (Apollo 17 landing site) appears decidedly darker than the surrounding terrain. You can see at a glance why this area intrigued the Apollo mission planners. There's definitely something geologically interesting about the site. 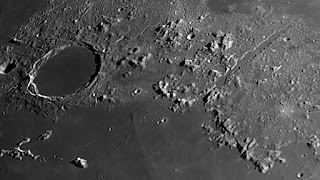 6. For a challenge, I tried making out the Alpine Valley, and found it! Even in the absence of all shadows, you could still see it thanks to the dark lava that welled up to cover its floor. 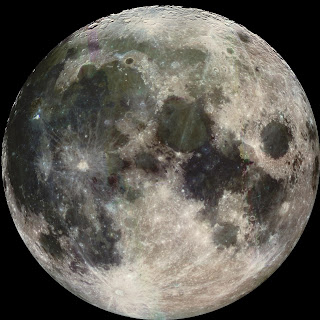 7. Made note that the eastern maria (Tranquillitatis, Serenitatis, Crisium, etc.) were, as a group, noticeably darker than the western ones (Imbrium, Procellarum, etc.). Made me wonder... is this actually so, or is it an optical illusion? (The eastern maria are generally smaller than the western ones, so perhaps the increased contrast with their surroundings is more noticeable, making them appear darker.) 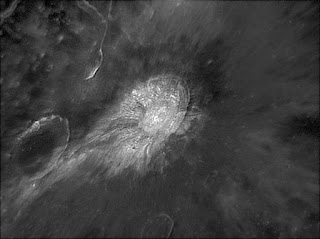 8. I discovered that Aristarchus is not the only superbright crater on the moon. There are literally dozens of them at full moon, scattered all over the lunar disk. 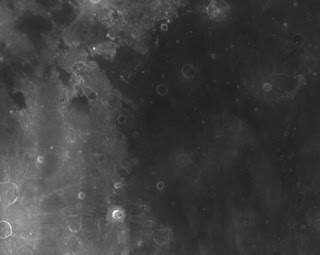 9. Some crater walls at full moon appear as brilliant rings of light. Best example was Julius Caesar, near the Sea of Tranquility. But there were many others as well. 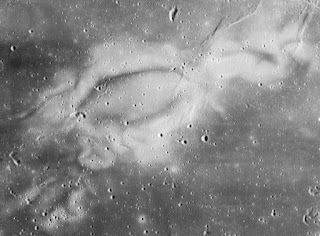 10. The weird albedo feature in Oceanus Procellarum, the Reiner Gamma, stood out clearly. A fascinating sight!

So see? There's lots to look at on the full moon. You've just lost one more excuse for staying indoors on a cloudless night!
Posted by B. Prokop at 6:04 PM