Just think about that for a moment. Imagine a universe in which every last star was a red dwarf. Looking up into the night sky, one would see… nothing (unless there were other planets in your solar system). And even then, a planet as large and distant as Jupiter would be little more than the faintest of dim lights, scarcely (if at all) visible to the unaided eye. There would not be all that much light from one’s own star to reflect. And even to professional astronomers with huge telescopes, the distant galaxies would be all but undetectable, and their existence perhaps even unsuspected. So despite the fact that in reality the vast majority of stars are indeed red dwarfs, we should all be thankful that there remains (in our universe, at least) that minority of brilliant giants which so magnificently light up our sky. 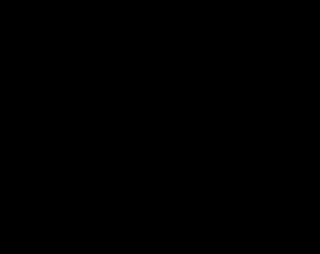 The Night Sky in a Universe of Red Dwarfs

Let’s continue our little thought experiment here a bit longer, and place our own Earth in such a system. If we made no alteration to our planet’s current orbit, our new sun would shine in the noontime sky with the brightness of approximately 100 full moons. That may sound like a lot, but keep in mind that our actual Sun is as bright as 398,352 full moons! (In other words, almost like having 40,000 Barnard’s Stars in place of just one.) At one AU, the Earth would be dark, frozen solid, and utterly lifeless.

To maintain our planet’s temperature (or at least one at which liquid water can exist for sustained periods on the surface), we’d need to move in a bit closer, in fact quite a bit closer – to about 6% of our current distance from the Sun (or a little less than 1/7th of the way out to Mercury in our own solar system). One year in such an orbit would be only 13 days long, assuming the planet was not tidally locked to the star, causing one hemisphere to be in perpetual daylight and the other in everlasting night ( but bringing the Moon along with us would likely prevent such a state of affairs). Barnard’s Star has only 1/5th the diameter of the Sun, but that decrease in size would be more than made up for by our planet’s closer distance to it. In fact, in this alternate Earth’s sky, our red dwarf would appear to be as wide as three suns! One would never see any total solar or lunar eclipses in such a system, since the Moon would appear only 1/3rd as large as Barnard’s Star from the Earth’s surface (and thus unable to cover the whole star), while the umbra of our planet’s shadow would extend only 283,000 miles out (in contrast to its current length of about 850,000 miles). So it would never cover more than a small portion of the lunar disk at the distance of our satellite’s orbit. (Keep in mind that the Earth’s umbra narrows to a point as one moves further along it.) We would observe a lunar eclipse as a dark patch of shadow moving across the face of the Moon’s surface, but not covering the entire disk. (To make up for that deficiency, however, partial lunar eclipses would be 9 times more common!)

But enough imagination; let’s return to facts. Our subject is interesting enough, without our having to move there. To begin with, Barnard’s Star turns out to be one of the oldest stars in the entire universe, and certainly among the most ancient in the Milky Way. We are exceptionally fortunate to have such a specimen from the Dawn of Creation right next door, so to speak. But not having actually witnessed any of its history, however, we must conjecture its story to date from clues contained within its present characteristics.

First of all, its stellar class ensures us that it has undergone relatively little change over its life so far – red dwarfs (at least in theory) tend to stay “just the way they are” for uncountable billions of years. Since it emerged from its primordial protostellar nebula, Barnard’s Star has shone out with 4/10,000ths of the Sun’s visual luminosity. There is some debate over whether it can be classed as a flare star. Despite being perhaps the most observed red dwarf in existence, only one such event has ever been recorded – on July 17th 1998. The flare lasted about an hour, and boosted the star’s magnitude for that duration to about 8.9 (still far below naked eye visibility). Does a single event determine classification? Astronomers can’t agree.

Another important clue to the past is the star’s metallicity; that is, its percentage of elements heavier than hydrogen and helium. Barnard’s Star’s metal content is only about 1/10th that of the sun. This is strong evidence of two things: the star’s age, and its probable origin in the galactic halo. The metallicity of a star tends to increase as a function of how young it is. Current theory holds that the extremely early universe (at about the time the very first stars were being formed) was utterly devoid of heavy elements. The hypothesized first generation of suns apparently consisted of supermassive bodies (far larger than anything in existence today), composed entirely of the very lightest elements. These monsters rapidly went through their hyper-fast life cycles, ending their brief existence in galaxy-shattering supernovae which spewed out into interstellar space vast quantities of heavy elements, such as carbon, iron, and oxygen, which had been forged as the by-products of nuclear fusion in their unimaginably hot cores. Successive stellar generations were formed out of the products of these first stars, thus composed of greater and greater concentrations of elements needed to build terrestrial planets (and us!).

So what do we see, looking at this star? First of all, it is physically quite typical for its spectral class (M4). Barnard’s Star has the mass of approximately 150 Jupiters (i.e., 14% solar mass), all contained within a diameter slightly less than twice that of Jupiter. Its surface temperature is a respectable 3,170º Kelvin. It is magnetically active, displaying signs of coronal X-ray activity and fairly strong chromospheric ultraviolet emissions. As mentioned above, only a single flare event has been noted in more than a century of intensive observation. One quite interesting feature is its remarkably slow period of rotation of 130 days. This leads to the obvious question, where did all of its angular momentum go? Although one would be tempted to assume it was taken up by a planetary system, this does not appear to be the case with Barnard’s Star. Once again, herein lies a tale. 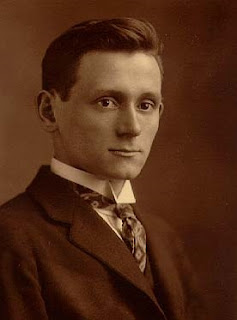 In 1963, astronomer Peter van de Kamp announced he had discovered one to two Jupiter-sized planets about Barnard’s Star by measuring minute wobbles in the star’s position over time. This claim rapidly gained wide acceptance in the global scientific community, and was even the cause of the world’s first serious attempt to engineer a means of interstellar travel (the British Interplanetary Society’s Project Daedalus), with the goal of reaching another planetary system within 50 years after launch. Unfortunately, like so many of these early exoplanet “discoveries,” this one also turned out in the end to be spurious. Ten years after the first announcement, John L. Hershey traced van de Kamp’s findings to a systemic error introduced into the data due to periodic cleaning and remounting of the lens in the telescope used to observe the reputed wobbles. This interpretation was the source of some very regrettable discord between former colleagues, and van de Kamp never reconciled himself, either to the refutation of his work, or to the astronomers who accepted such. He died in 1995 still convinced he had discovered another solar system. But Hubble Space Telescope observations made four years after his death definitively ruled out all possibility of any planet about Barnard’s Star as large or larger than Neptune, a finding that was subsequently refined to include any object significantly larger than the Earth itself. In addition, there were found no signs of interplanetary dust around the star, and no cold disk was observed. There still remains the remote possibility of worlds the size of Mars, or perhaps even as large as Venus, but no plans exist at this time to search for them, should they exist. 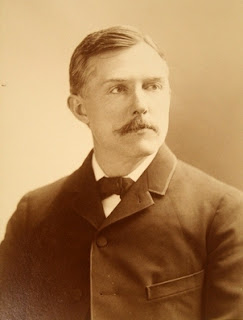 But we have yet to come to the most remarkable fact of all about Barnard’s Star – the principle reason for its fame other than its nearness. For until the quite recent discovery of hypervelocity stars (confirmed in 2005), Barnard’s star was the fastest-known moving star in the entire galaxy. Its velocity relative to our solar system is an eye-popping 87 miles per second, and its radial velocity toward the Sun is no less than 56 miles per second. In the time it likely took you to read that last sentence, Barnard’s Star had decreased its distance from us by as much as two hundred miles! This amazing rate of motion was discovered by American astronomer E.E. Barnard (mentioned in the posting on Wolf 359) as far back as 1916 (and hence the star’s name). Its apparent motion across our sky is nothing short of fantastic, traversing fully one half the angular diameter of the Moon in a typical person’s lifetime. Star atlases cannot even chart its position with a single dot; it must be displayed as a line with various dates indicated along its length. Barnard’s Star will continue to approach the solar system until the year 9800 AD, at which point it will be only 3.75 light years from the Earth. Yet even then it will still remain below naked eye visibility, topping out at magnitude 8.5. After that closest approach, the relative motions of it and our own Sun will cause the distance between them to increase. 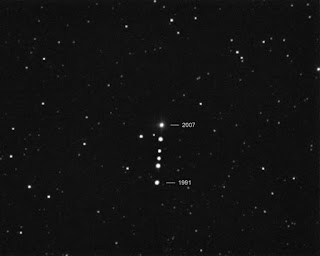 The direction of motion and the star’s velocity, along with other physical characteristics, indicate that Barnard’s Star does not belong to the Milky Way’s spiral arms, but is a member of the galactic halo. It just happens to be “passing through” at the moment, and lucky we are to be living at this precise time of its being so close to ourselves. 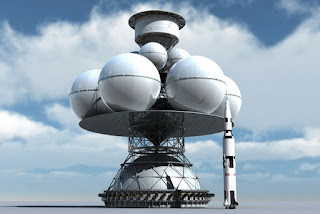 The British Interplanetary Society's Proposed Daedalus Interstellar space probe,
as compared to the Saturn V Moon rocket
Posted by B. Prokop at 6:12 AM