I wrote this piece almost three years ago (on September 17th, 2013), but I think it's aged well. I just thought it was time to take a break from our pilgrimage, put up our aching feet for a minute or so, sit back and enjoy the sky for its own sake. So here goes: 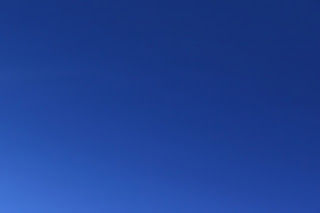 This morning was just too beautiful to let pass without taking advantage of it, so I decided to walk the 3 mile round trip to the grocery store to get the handful of items I needed for tonight's dinner. Along the way, I couldn't help but notice the horizon-to-horizon cloud-free sky overhead. My first thought was, "Why couldn't it be like this in the middle of the night, dammit?"... But my second thought was, "Wow, look at all that blue up there - it almost hurts the eyes!" And boy, was it ever blue. As it can only get on one of those late-summer, low humidity, hint of fall in the air, mornings like today. I found I couldn't take my eyes away, and had to stop for a while before I ran into something.

All that brilliant blue got me to thinking about how we visualize our place in the universe. All too often, we thoughtlessly dismiss how the Ancients viewed the cosmos - Earth at the center, everything else revolving about us in concentric spheres, like a gigantic version of one of those Russian nested dolls. But when we pay attention to how artists and writers living before Copernicus actually depicted the Cosmos and forget what we have projected back onto them, we discover that wasn't really the case at all. A far more accurate statement would be that they considered the Earth to be the bottom of the universe, and only incidentally its center. Near the end of The Divine Comedy, Dante imagines himself has having traveled to the Sphere of the Fixed Stars, looking back on the Earth:

My eyes went back through the seven spheres below,
And I saw this globe, so small, so lost in space,
I had to smile at such a sorry show.
Who thinks it the least pebble in the skies
I most approve.
(Paradiso, Canto XXII, lines 133-37) 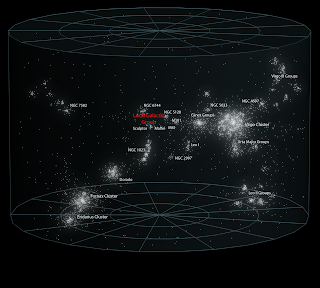 And there are many, many other examples as well. But this should suffice to put to rest the misguided idea that the Ancients somehow believed that we occupied some sort of privileged spot in Creation.

But what does all that have to do with that blue, blue sky up there this morning? Just this - up to only a few centuries ago, Mankind thought that the whole universe looked like our daytime sky. They were well aware since at least 200 BC that the Sun was far larger than the Earth, so it was easy for an educated person to deduce that the Earth's shadow would be a cone (as it in fact is). And being unaware as yet of the refractive properties of light, they may be excused for imagining that the darkness of the nighttime sky was restricted to that part of the Heavens which happened to be within the Earth's shadow. The rest of "everything up there" was assumed to be as brilliantly lit as the noontime sky on a cloudless day. What a glorious vision! No wonder Milton could write such lines as:

Those happy climes that lie
Where day never shuts his eye
Up in the broad fields of the sky. 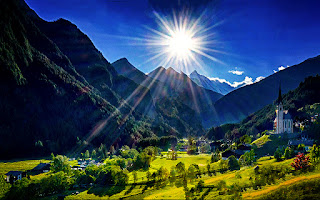 But we know better now, right? Hah! Speaking for myself, despite all I know about the structure of the universe, the Milky Way, the Solar System and our place in it, I still picture the sky as being somehow "overhead", with myself "down here" looking up at it. I still refer to Sunrise and Moonset, and to Polaris not moving in the sky. And it's damn hard to not think in that way.

It was only a week or so ago, when for a brief moment at a Carrs Mill Star Party, I caught a glimpse of what it would be like to visualize things as they actually are. There were only two of us there that evening, Dwane and myself. I was looking straight overhead at Vega, when without warning I (quite literally, and not figuratively) practically lost my balance, I got so dizzy. I suddenly saw Vega as not being above my head, but rather straight in front of me. The Earth was no longer beneath me, but instead I felt like it was a wall to my back, with me somehow pinned to its side - looking not up, but out, at the stars around me. I had to sit down. 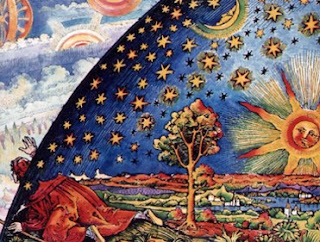 I was almost relieved when things got back to normal - Earth down here, stars up there. (It was rather fun to take a peek at Reality - but just not for long.)

Do get out there on the next clear, sunny day and try to look through all that blue up there. It can be exhilarating (as long as you can get back down).
Posted by B. Prokop at 6:52 AM