We now leave the world of the impossible (DX Cancri) and the infuriatingly frustrating (Wolf 359), and come to a target that will neither cause anyone to tear his hair out, nor tempt the more gullible among us to buy just one more ridiculously expensive eyepiece (yes, I’ve done that!), having convinced themselves that “this is all that is lacking” in the quest for observational nirvana. Seeing Barnard’s Star should not prove beyond the means of anyone possessing a decently-sized telescope. Recognizing it amongst the many stars in one’s field of view will of course be another matter entirely. 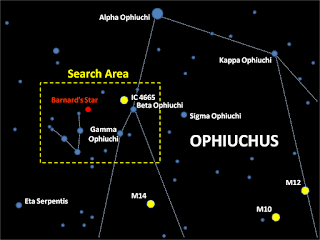 The first great advantage we possess in tracking down Barnard’s Star is its surroundings. There are easily identifiable markers in the immediate vicinity that will make at least the first stages of our search relatively easy. Off to the right, the bright, naked eye stars Beta and Gamma Ophiuchi (magnitudes 2.7 and 3.7, respectively) point us to the relevant area of the sky. These two stars could hardly be more different from each other. Beta Ophiuchi (also known by the Arabic name Cebalrai, meaning “Shepherd Dog”) is a star only slightly more massive than our own Sun, yet has nevertheless raced through its early stages of stellar evolution, and at age 3.8 billion years old is in the process of converting itself into a red giant. It currently shines out with a luminosity of 63 Suns. Meanwhile, its visually close neighbor (and they actually are quite close to each other, being only about 15 ly apart), Gamma Ophiuchi, is practically a newborn, being less than 200 million years old. But with three times the mass of the Sun, it will likely catch up with and overtake its more mature neighbor. This might lead one to imagine the pleasant prospect of future astronomers being treated to side-by-side planetary nebulas as the two stars simultaneously blow off their gaseous outer layers, but alas, their differing orbits about the galactic center will have pulled them far apart by such time. 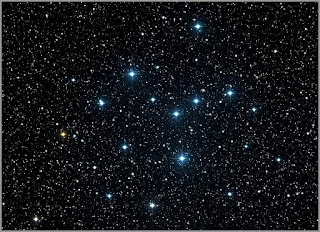 And speaking of young stars, a mere field of view away (using a wide field eyepiece) to the northwest from Beta Ophiuchi is the lovely open star cluster IC 4665. The components of this must-see object were born from interstellar gas and dust less than 40 million years ago! When you view IC 4665, you are seeing a true stellar nursery.

So much for the right hand side of our initial search area. 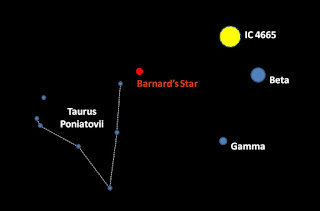 Off to the left is an asterism known as Poniatowski’s Bull. 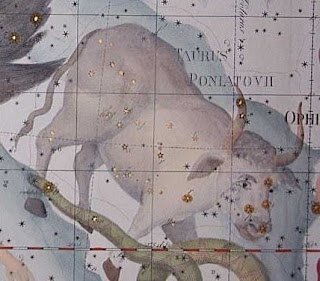 This distinctive grouping, bearing a striking resemblance to the only slightly larger Hyades, was once a constellation in its own right. The Polish-Lithuanian astronomer and Jesuit priest Marcin Odlanicki Poczobutt created the constellation Taurus Poniatovii in 1777 out of leftovers from the defunct constellation “Tigris River” in honor of the then King of Poland, Stanislaus Poniatowski. 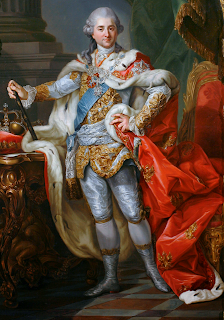 But in a case of celestial irony, Poszobutt’s creation scarcely outlived the nation of its honoree. For just as the Kingdom of Poland was being ruthlessly partitioned in the late 18th Century between its more powerful neighbors Russia, Austria-Hungary, and Prussia, Taurus Poniatovii was in like manner being hacked apart and divvied up between Ophiuchus, Aquila, and Serpens Cauda.

So far, we’ve had it easy. Under dark, moonless skies, all the stars so far mentioned are naked eye. And even from light polluted suburban Maryland, binoculars at most would have sufficed to this point. But “Here is where one must put aside all division of spirit, and gather your soul against all cowardice” (Dante, Divine comedy, Canto III, 14-15). For in truth, Barnard’s Star has more readily recognizable signposts pointing toward it than for any star we’ve yet encountered. 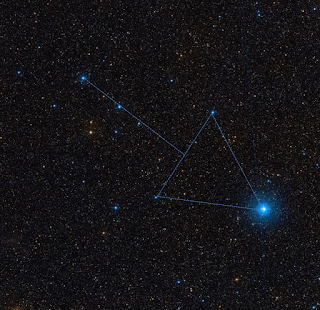 The easiest way I know of to spot Barnard’s Star is to put 66 Ophiuchi at one edge of your field of view, and look for three approximately 7th magnitude stars arranged in a rough line pointing straight at that bright star (see above image). They form the shaft of an imaginary arrow with 66 Ophiuchi as the tip of the arrowhead. Focus your attention on those three stars, and look somewhat closer to 66 Ophiuchi and a bit to one side (see image), and voila! There is Barnard’s Star. 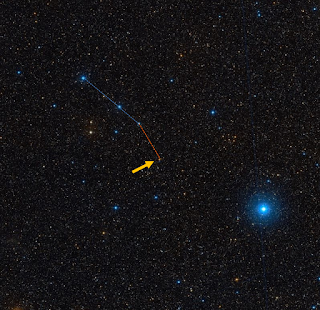 You may need averted vision at first to spot the star. But I have found that, once located, Barnard’s Star is bright enough to look directly at and still see. I have successfully observed this star using an 80mm Stellarvue refractor, with a 17mm Nagler eyepiece.

(Note: final two images are as mirror-imaged, to match the view one would see using a refractor with a diagonal.)

Keep in mind as you observe this astonishingly faint object, that you are looking at the closest thing you'll ever see outside of our own Solar System! It never ceases to amaze me that all the brighter stars up there are so much further away.