Do not neglect to show hospitality to strangers, for thereby some have entertained angels unawares. (Hebrews 13:2)

I find our sun's ongoing close encounter with Barnard’s Star to be absolutely amazing. Never again in the lifetime of the universe will these two suns meet again, and we are present to see the event. And the two stars could hardly be more different. The one being small in mass and luminosity; the other gigantic and bright. Ours boasting a rich system of planets, moons, asteroids, comets, and Kuiper Belt Objects; the other apparently traveling the star lanes in complete solitude. The one destined for a trillion-year lifespan of changeless quietude; the other even now preparing to shed its youthful exuberance before collapsing upon itself into a white dwarf.

How many chance encounters do we have in our own lives? Even concerning our closest friends, can one ever be certain that your next meeting won’t be the last? And how much more so for the great mass of people who cross our paths each day. Several years ago I happened to be pulling out of my driveway on the way to a (much needed) haircut. At that very moment an elderly woman was walking along the sidewalk not far from my house. To this day I have no idea what made me give her even a second glance, but for some inexplicable reason I did. Something made me stop and ask her if everything was all right. To my astonishment, she replied in Russian (in which I happen to be near-fluent) that she could not speak English and had gotten completely lost. To her equal astonishment, I answered (also in Russian) that I could perhaps help her out. It turned out that she had had decided to walk to the grocery store. Well… knowing that the nearest one was nearly two miles away, I told her I’d drive her there. I waited out front until she had finished, and then said I’d drive her home. Turns out she had no idea where “home” was. We ended up driving up one street and down another, until she finally exclaimed, “Vot dom syna!” (Here is my son’s house.) She was only visiting, and had no knowledge of the local area at all. Now what were the odds against my leaving the house at the precise moment of her passing by? (Had she been even a hundred yards further down the street, I probably would have picked up enough speed to have missed noticing her altogether.) And what were the odds of it being me who asked her whether she needed help? (Not many people in my neighborhood understand Russian.) I related the incident to a co-worker the next day, and she told me, “You saw an angel!” Whatever she was, I never saw the woman again. And I never did get to the barber that day.

Matthew warns us in his Gospel that Christ will ask of us one and only one question on the Day of Doom – how did we respond to those in need who crossed our path? Did we feed the hungry, shelter the homeless, or clothe the naked? In Luke, we might notice that the man beaten by robbers on the road to Jericho was not known to the Samaritan who stopped to help him – he was just “some guy” he chanced upon on his way. James is about as blunt as one can get: “True religion is this: to visit orphans and widows in their affliction.” Saint Augustine tells us, “So there is the poor man and there is the rich, and they have met each other, and the Lord has made them both; the rich to help this one, the poor to test that one.” (from a sermon given sometime between 425 and 430 A.D.)

Dostoevsky illustrated this point perfectly in his novel The Brothers Karamazov, where the character Grushenka tells the following story: 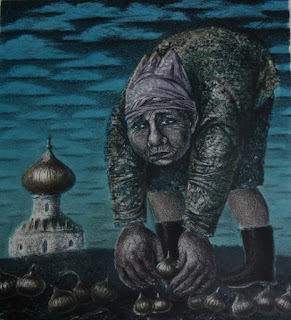 There once lived a wicked old woman – one might even call her an evildoer. She died without a single good deed to her name. At once the demons seized her and cast her into the Fiery Pit. But even then, her guardian angel refused to give up on her and thought, “Can I not recall even one good deed done by her, that I might bring it before God?” Finally he thought of something, and coming before God the angel said, “They do say that once, while standing in her kitchen garden, she pulled up an onion and gave it to a poor woman who was passing by.” “Very well,” answered God. “Find that very same onion and hold it out over the pit. Allow the woman to grab hold, and then pull with all your might. If you manage to pull her out, then she can join us here in Heaven. But if the onion breaks… well, she’ll just have to stay where she is.”
The angel ran to the edge of the pit and held the onion out to the woman. “Grab on,” he called to her, “and I’ll pull you out.” With great care (not wanting to break the onion), the angel pulled and pulled, and had very nearly gotten her out when the other sinners in the Fiery Pit saw what was going on. They all began holding on to her legs, so that they might be pulled out along with her. But the old woman, being as wicked as she was, began to kick them away, shouting, “I’m the one who’s getting out here, not you. It’s my onion and not yours!” And the very instant those words left her lips, the onion snapped in two and she fell back into the lake of fire, where she burns to this day.
(This is my own translation. I have taken some slight liberties with the text to make the story more comprehensible in isolation from its original context.)