After struggling with DX Cancri, observing Lalande 21185 turns out to be a cakewalk. Situated as it is on the border between two constellations, we have two avenues of approach by which to arrive at and identify our target. We can take advantage of readily discernable naked eye star patterns in the constellation of our choice to begin our search. 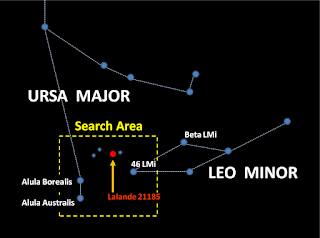 I prefer to start with the somewhat flattened diamond-shaped asterism at the westernmost extremity of Leo Minor (refer to star chart here: http://www.constellation-guide.com/wp-content/uploads/2013/02/Leo-Minor-constellation-map.gif ). At the top of the diamond we find the magnitude 4.2 double star Beta Leonis Minoris. (But don’t try to split this impossibly tight double. It can only be done using very sophisticated interferometric techniques.) At the left edge of the asterism is the curiously named magnitude 3.83 star 46 Leonis Minoris (46 LMi). This somehow escaped being catalogued as the alpha component of Leo Minor, despite being that constellation’s brightest star and even boasting the proper name Praecipua (Latin for “Chief [Star of Leo Minor]”). The otherwise unremarkable 30 and 21 Leonis Minoris complete the diamond. Leo Minor’s location to the immediate north of the easily recognizable Zodiacal constellation Leo makes it easy to find, and the diamond asterism is readily identifiable. 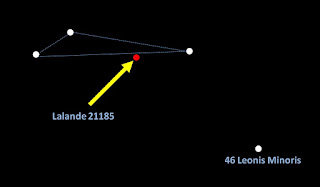 Now that we have our bearings, we can use either a low power, wide field eyepiece, or even binoculars, to locate 3 sixth magnitude stars about 3 full moons to the northwest of 46 LMi, which form a very elongated triangle with its longest side facing south. These three stars, which will serve as our guide to the next level, are identified only by catalog numbers. Two are variable stars, which can potentially throw off the observer at this point, especially if you’ve happened to catch the easternmost star of the triangle at minimum, when you’d see it shining at only a little more than eighth magnitude. I can fit this entire asterism within the field of view of my 20mm Pentax eyepiece. Lalande 21185 lies almost precisely on the longest side of the triangle, about one third of the way from the right edge.

One can also approach this asterism from the opposite side, starting at the two naked eye stars at the southern extremity of Ursa Major, Alula Borealis (Nu Ursae Majoris, or Nu UMa) and Alula Australis (Xi Ursae Majoris, or Xi UMa).  (Seen to the immediate left of Leo Minor on the linked star chart.) These two guide stars are themselves of great interest, and you should spend some time with them before moving on.

The northernmost, Nu UMa, is a giant of a star, with a mass equal to 5 Suns and a diameter large enough that, moved into our solar system it would engulf the planet Mercury, shining with a luminosity of 1355 Suns! Its terrific mass ensures that, like all such stars, it is rushing through its life cycle at lightning speed compared to our Sun. At only 100 million years old, it has already exhausted the supply of hydrogen in its core, and has moved on to fusing helium into carbon and oxygen. It has a tenth magnitude companion at a distance of 950 AU that is remarkably similar to the Sun.

The southernmost star of this remarkable pair, Xi UMa, is of considerable historical significance, for on May 2nd, 1780 the great astronomer William Herschel realized that this was a binary star system, the very first to be discovered. 38 years later, the orbits of the two components were calculated (another first) by the French astronomer Felix Savary. We now know that each of these two primary components are themselves double stars, making Xi UMa a system of systems, comprised of 4 stars altogether.

From these two guideposts, the western edge of the already-described triangle of sixth magnitude stars is now about twice the distance between Nu and Xi UMa to the northeast of Alula borealis. Once again, the easiest way to find your way is by using a wide field eyepiece or binoculars.

The star’s precise location is now relatively easy to find. If using binoculars, you'll see a bent line of three faint stars perpendicular to the longest side of the aforementioned triangle. Lalande 21185 is the furthest south of these three. If you're searching with a telescope, look for a curious pattern of three optical doubles made up of ninth magnitude stars which form an unmistakable triangle just south of Lalande 21185. 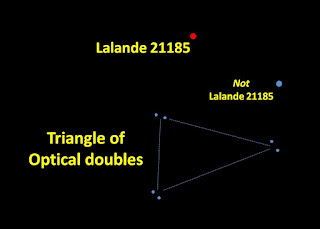 The only difficulty I have ever encountered in identifying Lalande, once I have made note of the “Triangle of Doubles”, is a momentary confusion between it and a star of similar magnitude off to the right (in my mirror-imaged view). You can recognize Lalande, however, by its slight reddish-orange hue. Definitely a red dwarf!

At magnitude 7.47, Lalande 21185, although the brightest red dwarf star in the entire sky (as seen from the Earth), is still too dim to be seen with the naked eye!