“Tell me, Muse, of the man of many ways, who was driven
on far journeys ...
Many were they whose cities he saw, whose minds he learned of,
many the pains he suffered in his spirit on the wide sea,
struggling for his own life and the homecoming of his companions.”
(The Odyssey, Book One, Lines 1-5) 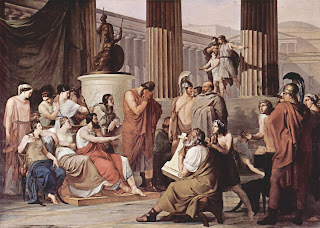 I could readily sympathize with any reader who, encountering The Skylark of Space for the first time and having dutifully read along as far as chapter 9, might by now be wondering “just where is all this much vaunted Super Science I’ve been hearing so much about? Other than a flying bathtub in the first paragraph of the novel, I certainly haven’t seen it yet!” Well, with the very next chapter, all that is about to change. In fact, it all changes between lines…

For several chapters, the story is basically all about burglary and industrial espionage, and in the space of a few lines on page 48 (of the 1958 revision, page 96 of the F.F.F. edition), we are in a brand new world. 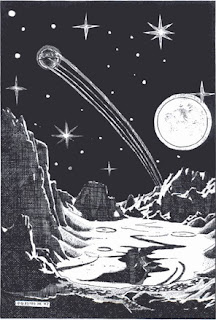 “A few nights later, in inky blackness, a huge shape descended rapidly in front of the shed, whose ponderous doors opened to receive it and closed quickly after it. The Skylark moved lightly and easily as a wafted feather, betraying its thousands of tons of weight only by the hole it made in the hard-beaten earth of the floor as it settled to rest. Opening one of the heavy steel doors, Seaton and Crane sprang out into the darkness. …  “She flies!” [Seaton] cried exultantly. She flies, dearest, like a ray of light for speed and a bit of thistle-down for lightness. We have been around the moon!”

Around the Moon! And in the very first trial flight of the spacecraft!?! We of the 21st Century should not be too scandalized. Such things were common in mid 20th Century fiction. Allow me to restrict myself to movies alone. Let’s take a look at how they viewed the possibilities of the first-ever voyage into space: 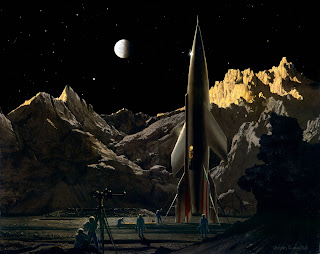 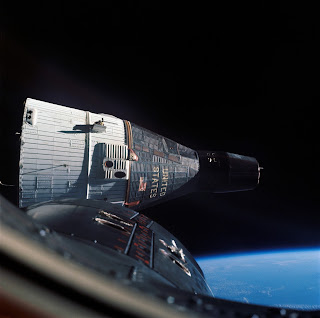 And this* was followed, of course, by Yuri Gagarin, Alan Shepard, and the rest of historical reality - with no less than  6 Mercury missions, 12 Gemini, and 4 Apollo flights (not to mention the numerous unmanned Ranger, Surveyor, and Lunar Orbiter probes) before Neil Armstrong made that “one small step” onto the lunar surface.

I strongly suspect that much of the reason for the failure of imagination on the part of these early pioneers of imaginative fiction was in the very word “destination”, as in the first movie title listed above. It was hard for them to wrap their minds around the idea of empty space (a.k.a., in orbit) being a destination. Some solid surface to land on was required for that. 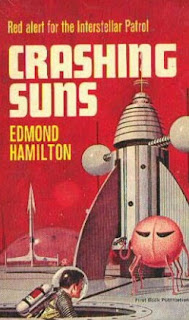 In any event, despite such a stupendous initial flight, Smith was not about to hang around the solar system for an instant longer than he had to. He is off to the stars! Believe it or not, this was uncharted territory for science fiction when Skylark was being written. In the end, the novel shared the palm for “first extra-solar adventure” with Edmond Hamilton’s first Interstellar Patrol adventure “Crashing Suns”, which was published in the very same month (August 1928) by the magazine Weird Tales. (So something was undoubtedly in the water that year!) Prior to that “august” month, extraterrestrial voyages had been restricted to worlds within our solar system. But ever after, it was “Sic itur ad atsra.” (The Aeneid, Book IX, Line 641) 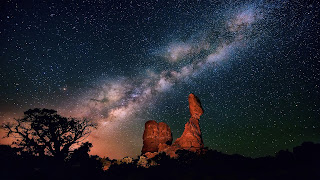 * A notable exception to this catalogue is the 1950 film Project Moonbase. Finally, a movie that has even a distant resemblance to reality. Initial flights into orbit, followed by the building of a space station, and then and only then an attempt to fly out to the Moon – and even then, only a flyby mission (around the Far Side and back).