“In hideous fashion, fiendish Charybdis sucked the salt water in. When she spewed it forth, she seethed and swirled through all her depths like a cauldron set on a great fire, and overhead the spray fell down on the tops of the two rocks. But when she sucked the sea-water in, one might look right down through the swirling eddy while the rock roared hideously around her and the sea-floor came to view, dark and sandy. Ashy terror seized on the crew. We had looked her way with the fear of death upon us.” 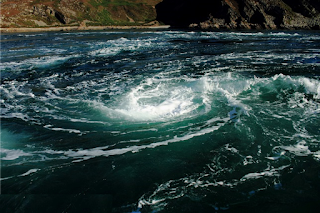 As in some cheesy silent movie, with the heroine tied to the railroad tracks while a train is roaring down at full speed, to be rescued only at the last possible second by her lover, Dorothy Vaneman is saved from the clutches for “Blackie” DuQuesne just minutes before plunging to her doom, caught in the inexorable clutches of a black hole. 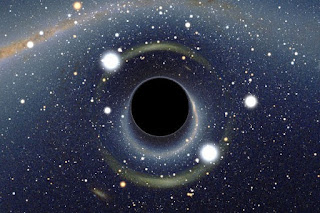 Now Smith didn’t use the terminology “black hole” – such things were yet to become part of the astronomer’s lexicon. He called it a dead sun. Having come to their senses after their wildly accelerating flight due to Perkin’s fall onto the control panel, DuQuesne turns his ship around and starts to head back toward Earth. But unseen in his path lies a monster, a dead sun with a tremendous gravitational field – so great that his spacecraft’s engines lack the strength to escape its pull. Were not Seaton and Crane hot on his tail in a far larger and more powerful ship, they would surely have been doomed. In yet another cosmic coincidence, the rescuers arrive in the nick of time, saving not only Dorothy, but her kidnapper and another young woman who had been a prisoner of the by now dead Perkins.

This entire episode is a good example of how serious Smith was about the “science” in his story. It was well thought out, fully integral to and integrated into the plot, and stretched the imaginations of his 1928 audience. This was truly cutting edge stuff, and Smith was just getting started!