I intend over the course of the next several weeks (and likely months) to present on this blog an in-depth critical analysis of one of the most important (although definitely not one of the “best”) works of science fiction of all time – E.E. “Doc” Smith’s The Skylark of Space and its two sequels Skylark Three and Skylark of Valeron (which together comprise a single, uninterrupted narrative). This Skylark Trilogy* is arguably the greatest “Super Science” epic, a.k.a., “Space Opera”, ever written. (Other contenders for the prize include The Black Star Passes and its sequels by John W. Campbell, the Interstellar Patrol stories by Edmond Hamilton, and The Lensman Series, also by E.E. Smith.) 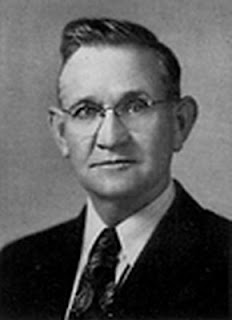 Although perhaps not essential to following along with my commentary, I would highly recommend reading the books for yourself. Word of warning, however. Smith obsessively re-wrote and re-re-wrote the first novel in the series between various publications, managing to make a hash of the entire thing in the process. The best written and most enjoyable version remains the original text, as published in Hugo Gernsback’s Amazing Stories in 1928. All the free online versions I have been able to find are unfortunately vastly inferior, later editions, as are all but one of the currently in-print variations. The best ways I know of to read the novel today is to either... 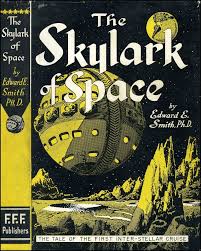 - obtain a copy of the 1946 F.F.F. Publishers hardback edition (re-printed in 1947 and 1950), out of print for 66 years and counting. This is perhaps the ONLY reasonably available means of reading anything remotely resembling the original version of the story. There are fortunately still several copies available through used booksellers on line at wildly varying prices. (I recently found one for 35 dollars and snatched it up, as the copy I already owned was literally disintegrating.)

- purchase a copy of the still in-print edition, published by the University of Nebraska Press, under its “Bison Frontiers of Imagination” series (cover shown below). This is a reprint of Smith's 1958 revision of the novel. It is available at Amazon.com. 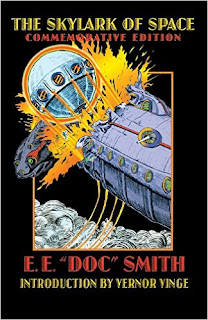 The big problem is that at this point there is really no authoritative text to point to and say, "This is the true version of The Skylark of Space!" There are simply too many variant editions, with alternative readings at nearly every point. Just look at this entirely representative example at the very end of the first chapter.

F.F.F. Publishers version: "Take a brace, old top - you've probably thrown a wrench into your gears already by this night's work," he muttered to himself as he ruefully considered that he had begun his career as an engaged man by forgetting all about his engagement dinner and resolved that he would make it up to his sweetheart by all the means in his power.

Now here are the very same lines, from the University of Nebraska Press version: "What a stunt!" he muttered ruefully to himself as he considered what he had done. "What a stupid jerk! If she doesn't give me the bum's rush for this I'll never do it again if I live to be a million years old!"

Or, perhaps more interestingly,  these lines from the very beginning of the same chapter.

F.F.F.:  Aroused from his stunned inaction by the entrance of his colored laboratory helper, he silently motioned him to clean up the wreckage.
"What's happened, doctah?" asked the dusky assistant.
Search me, Dan. Wish I knew myself," responded Seaton, absently.

Nebraska: Aroused by the entrance of his laboratory helper, he silently motioned him to clean up the wreckage.
"What happened, doctor?"
"Search me, Dan.... wish I knew myself," Seaton replied, absently.

And I could have turned to any page at random, and presented a similar discrepancy in wording. And the F.F.F. edition is 245 pages long, while Nebraska's is a scant 159 pages, although Nebraska has 45 lines of text per page, while F.F.F. has but 39.  This is only partially offset by F.F.F. having lines 64 characters in length (including spaces), while Nebraska has only 60. Suffice it to say that, short of a painful line-by-line comparison of the various competing textual variants, we are faced with not really knowing "authors intent". And even then, it is probably too late now to ever come closer than an educated guess. So for the purposes of this analysis, I will be using the Nebraska text, solely because it is more easily obtainable for now - at least, until someone finds it important enough to reprint the (in my opinion) demonstrably superior F.F.F. version. Any page numbers I reference will follow those found in Nebraska.

But why bother with such an in-depth look at what is admittedly a poorly written example of early 20th Century pulp fiction? Why, when there are thousands upon uncountable thousands of more “respectable” books out there clamoring for our attention? Why indeed? 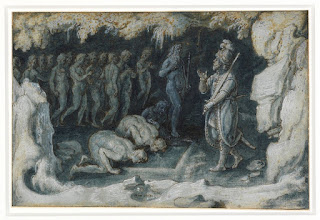 Odysseus in the Underworld
Perhaps the best answer to that question lies, paradoxically, within the book’s very inferiority. No one knows who first said, “The perfect is the enemy of the good” (although Voltaire certainly made the aphorism popular), but it definitely applies in this case. Not that long ago, I was mocked in an internet debate for my gleaning wisdom from junk literature. But I contend is that it is precisely in such literature that the Big Truths are verified. Great artists and brilliant writers ought to be expected to express Deep Thought and Eternal Truth. It is, after all, part of their job description. We shouldn’t be surprised if, for instance, Homer, Virgil, Dante, or whoever wrote Gilgamesh (or even, for that matter, St. Paul) inserts a Voyage to the Underworld at the critical juncture in their hero’s adventure. They are consciously tapping into our deepest insights into what makes us human, and using all the artistic power at their command to express them. But when E.E. Smith does the same in Skylark of Valeron without (apparently) being aware he is doing so, that ought to make us sit up and take notice. Perhaps there’s something more than just Great Art behind such ideas…

So sit back and buckle up. I intend to prove that Homer was right because E.E. Smith said the same things by accident. This ought to be fun!

* I do not include Skylark DuQuesne as part of the series. This novel was written decades after the original three in a radically different style, and sets an entirely different tone. It is an independent work, which does not belong with, and is not a part of, the trilogy. I will not again refer to it.