“First you will come to the Sirens, who bewitch every one who comes near them. If any man draws near in his innocence and listens to their voice, he never sees home again, never again will wife and little children run to greet him with joy; but the Sirens bewitch him with their melodious song.” (The Odyssey, Book XII) 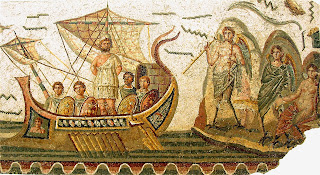 Odysseus, lashed to his mast and pleading with his men to turn into the rocks, is one of the most enduring images from the entire Odyssey. The very phrase “siren song” is an integral part of our vocabulary. The dramatic scene has been portrayed by artists, sculptors, and pottery makers thousands of times over the past two millennia. Its power lies in its faithfulness to our human nature. Who hasn’t heard the seductive music of the Sirens, tempting us to our destruction if only we would heed their call?... 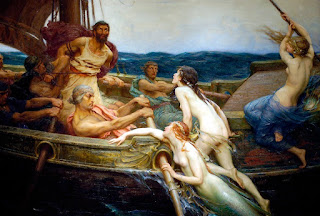 But what is this? E.E. Smith has given us here, in Chapter 6 of Skylark, what can only be called an un-Siren. Seaton, exhausted and on the verge of a complete physical collapse from overwork, is deaf to the pleas of his friend and collaborator Martin Crane to take some desperately needed rest before it’s too late. Stymied at every turn in his efforts to pull Seaton away from his work, Crane turns to Dick’s fiancée Dorothy. Perhaps she could “distract” him?

And Dorothy knows exactly what is called for. (The ensuing scene, by the way, is one of the very few in which the 1958 rewrite is actually superior to the 1928 original.) Knowing Seaton’s fondness for her violin playing, she maneuvers him into eating his fill at dinner, lures him into the study, and goes to work:

“She took up a violin – Crane’s violin – and played. First his favorites: crashing selections from operas and solos by the great masters, abounding in harmonies on two strings. Then she slowly changed her playing to softer, simpler melodies, then to old, old songs. Seaton, listening with profound enjoyment, relaxed more and more. Pipe finished and hands at rest, his eyes closed of themselves and he lay back at ease. The music changed again, gradually, to reveries; each one softer, slower, dreamier than the last. Then to sheer, crooning lullabies; and it was in these that magnificent instrument and consummate artist combined to show their true qualities at their very best.

Dorothy diminuendoed the final note into silence and stood there, bow poised, ready to resume; but there was no need. Freed from the tyranny of the brain that had been driving it so unmercifully, Seaton’s body had begun to make up for many hours of lost sleep.” 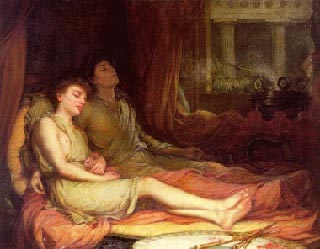 So - Smith’s Dorothy proves to be both Siren and Penelope in one. Rather than luring Seaton to his doom, she ever so gently guides him home.

(By the way,  Dorothy's violin playing will, in one of the finest scenes of the entire trilogy, play a much larger part, as our heroes visit the planet Norlamin in Skylark Three. Wait for it.)